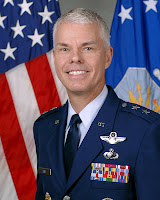 EGLIN AIR FORCE BASE, Fla. - The new commander of the Air Armament Center plans to improve the synergy between weapons and aircraft. Maj. Gen. Charles R. Davis, who previously was program executive officer of the Joint Strike Fighter, has managed other aircraft programs as well and wants to incorporate that knowledge into Eglin’s weapons programs. "We at the AAC can do a better job trying to help build a strategic plan on how we produce more synergy between the weapons and the airframe," Davis said. The "levels of technology and capability between the two have always been out-of-sync and mismatched,” and he wants to “rebalance the equation.” Eglin is scheduled to become home to the Joint Striker Fighter Training Center and the 7th Special Forces Group. (Source: Eglin Air Force Base, 05/12/09)
Posted by David Tortorano at 1:19 PM